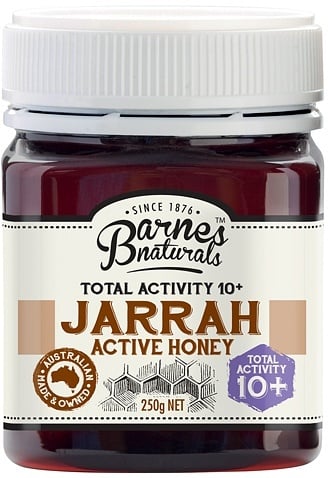 Honey is generally considered to be naturally antimicrobial arising from factors such as the osmolarity, pH, hydrogen peroxide content and saturation of sugars. Active honeys commonly have a naturally thick consistency with a strong rich flavour, being relatively dark in colour when compared to regular honey. In Australia, both Manuka and Jarrah honeys may be considered ‘Active’. Jarrah trees (Eucalyptus marginata), unique to Western Australia, are a large forest tree predominantly found in the state’s southwest, from north of Perth to as far south as Albany.

The Jarrah tree is a slow growing Eucalyptus that can grow up to 40 metres in height and can live up to 1000 years. Jarrah trees only flower every two years, usually from December through to January in the early summer, and when in bloom are magnificently covered in beautiful creamy flowers.

Jarrah produces a deliciously dark and thick honey with an aftertaste likened to an unsweetened caramel. This honey is not as sweet as other honeys due to its low glucose and high fructose levels and for this reason pure Jarrah honey does not candy.

NOTE: This honey is sourced from Western Australia.